Having worked at several large-scale international sporting events, Sébastien Martin joined the Organising Committee of the Alltech FEI World Equestrian Games™ 2014 in Normandy on 6 January 2014 as Site Director of D’Ornano Stadium in Caen. His role is to ensure that the Opening Ceremony, the Dressage and Jumping events will run as smoothly as possible from 23 August to 7 September. And one great challenge is involved: to transform this football stadium into an equestrian arena!

Sébastien, where did you work before joining the Normandy 2014 Organising Committee?

I was Operations Manager at the Stade de France from its inauguration in 1998 for the football World Cup. I was only supposed to be there for a fortnight, but in the end I stayed for eight years!  I then managed my own company for two years. My job involved organising events but also advising producers when they used different venues, such as the Stade de France or the Palais Omnisports de Paris-Bercy. I worked with the French Football Federation, the French Rugby Federation and various different concert organisers. Following on from that, I joined the Organising Committee for the 2007 Rugby World Cup, and took over the management of the Parc des Princes. I organised the French XV’s home matches. My career then stayed in the field of rugby: I joined Racing Metro 92 rugby club when they entered the Top 14 in 2009. Once again, I was only supposed to assist Jacky Lorenzetti and Pierre Berbizier for a few matches, but ended up staying 3 seasons. I took 2013 off before joining the Organising Committee of the Alltech FEI World Equestrian Games™ 2014 in Normandy last January.

What is your mission as Site Director of D’Ornano Stadium?

My job is to coordinate all of the departments present on the Stadium site in order to ensure that the event is carried out to the necessary standard, with all the details and specifications that are fitting with this type of international event.

What has happened up to now at D’Ornano Stadium? 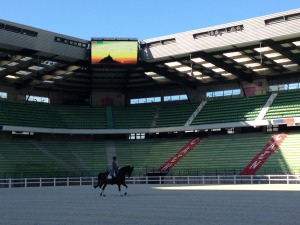 To date, the work on site is on schedule in relation to the “theoretical” timetable put in place for the launch, as a horse first stepped into the stadium’s main arena on 12 June.

But before starting the work, we spent 6 months planning with the city and Caen's football club in order to be able to start work on the stadium the day after the last match of the season and the club’s promotion to the French premier league. Our primary concern was to protect the pitch. A 1,000m2 rigid surface was installed so that the site lorries did not damage the grass. Then an under-layer was spread over it, completely covering the turf. Another layer was added on top this under-layer, upon which the arena surface was installed.

All of the arenas are now finished: the main arena inside the stadium, and the two warm-up arenas outside the stadium. We are now carrying out maintenance on these different arenas. At the beginning of June, we began setting up the stables where the horses will stay as of the start of the test events, as well as the interior of the site, such as installing the furniture, the media zones and the exterior areas that will not be used for sport, such as the VIP marquees, the sales windows and the information points, so that everything is ready for the test events on 23 June.

What construction work must still be carried out?

The largest construction work is already complete. Now, the challenge is to transform the site into a stadium that is ready to host an international-level competition. We must receive deliveries, take care of the cleaning, the facilities, etc. so that everything is ready to welcome the horses and spectators for the test events.

What is your greatest challenge?

For me, the greatest challenge is to transform a site which, until now, has only hosted football matches on all of its 6 pitches into a site which can host international-level equestrian events, and all in the space of one month!

It will also be a challenge to get the arena back to its original state (football pitch) for the "Stade Malherbe de Caen" in just a few days.

But everything has been planned, and we have been working flat-out for months, years for some, to ensure that everything goes well. I am confident. And, above all, excited!

1 / 25
All news
Tickets
Register to the newsletter