Valegro and Charlotte Dujardin have done it again: gold in Freestyle

British dressage wonders Valegro and Charlotte Dujardin have added the second world championship title to their collection, making the gelding a true one-and-only Number 1 dressage horse of the world, holding every possible title at the same time. On a score…

Invited at the last minute to join the Dutch Dressage team to fill in for Danielle Heijkoop, the young Diederik van Silfhout has created a sensation at the Alltech FEI World Equestrian Games 2014™ in Normandy. Riding the promising Arlando NH NOP, the… 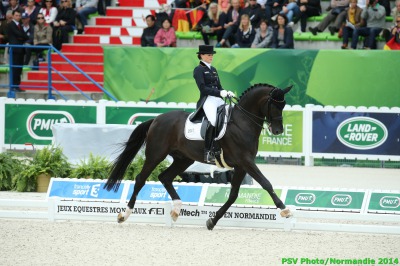 The dressage world, including 21.000 spectators in a sold out D’Ornano stadium, is awaiting the third Dressage medal. The Freestyle Grand Prix is the last competition for the dressage riders at the Alltech FEI World Equestrian Games in Normandy.

Multi tasking is the name of her game, in dressage as well as in life. Inessa Merkulova from Russia – turning 50 this year – had determined to reach the Grand Prix Special and there she was with her horse Mister X, riding 70.252 at the pair’s first…

Tears were flowing freely on Wednesday at the Grand Prix Special of the Dressage competition when Nathalie zu Sayn-Wittgenstein left the arena at D’Ornano stadium. Not that the Danish princess did not like the result of 75.406 percent but Caen is the… 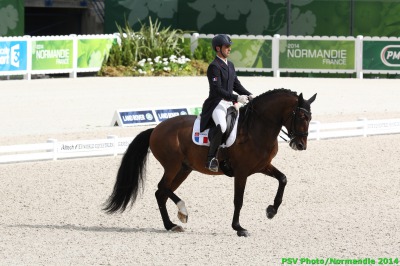 France's last rider to enter the arena in the Grand Prix Dressage event, Arnaud Serre pulled off an impressive feat, riding his Lusitano Robinson de Lafont de Massa, to a 72.843%, which was good enough to qualify him for the Grand Prix Special.