The French vaulters were quite simply outstanding on this last day of competition at the Caen Zenith. Following on from the two individual medals won by Jacques Ferrari and Nicolas Andréani, the team from La Cigogne Stables clinched an historic bronze…

Historical Day for France in the Vaulting

In the culmination of an electric Men’s Individual Final, the French make it a historical day by taking both the gold and silver medals, plus the host nation's first medals of the World Equestrian Games.

The finals day of the Vaulting competition is upon us, this morning the atmosphere was electric and the crowd witnessed the tightest Pas Des Deux competition a World Equestrian Games has ever seen.

Changing of the guard on the men’s side? 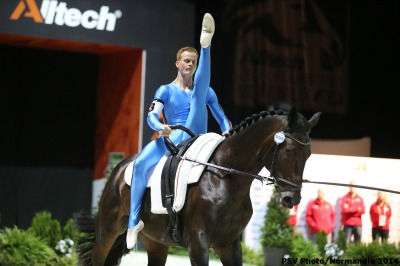 In Caen’s Zenith arena on Thursday afternoon, the technical test took place in the men’s Vaulting competition. While it seemed that his path to victory was straightforward, the Frenchman Jacques Ferrari was forced to concede defeat in this test….

Outstanding 9 for Austria in the Pas-de-Deux!

They did it! Austria’s Jasmin Linder and Lukas Wacha achieved the first score over 9 in the Vaulting at the Alltech FEI World Equestrian GamesTM 2014 in Normandy, in the Pas-de-Deux competition. Things are looking good for tomorrow’s free test final!

Joanne Eccles way out in front

The women’s technical test wrapped up Thursday afternoon in Caen’s Zenith music hall. It would seem that nothing will keep Joanne Eccles from bagging another world title.