Reining: Reiners take a day off in Normandy 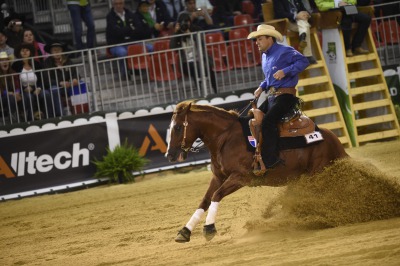 The Reining Team Competition and 1st individual qualifier at the Alltech FEI World Equestrian Games 2014 in Normandy provided excitement on the stands of the Park Expo arena in the first two days of competition.  Yesterday, the first FEI medals were awarded….

When NRHA’s only 2 Million Dollar lady rider, Mandy McCutcheon, rode in the Parc Expo arena this morning, Team USA was leading the competition rankings after Andrea Fappani had obtained the top score (224) and Jordan Larson the third best (221) in the…

The second part of the Reining Team Competition and 1st Individual Qualifier of the Alltech FEI World Equestrian Games 2014 in Normandy offered great runs this morning.  At half time, with 20 horse-rider combinations left to go, Team USA is leading the…

Reining is a judged event designed to show the athletic ability of a ranch type horse within the confines of a show arena. Contestants are required to run one of thirteen approved patterns included in the NRHA Handbook. Each pattern includes small slow circles,…

Piet Mestdagh of Team Belgium, riding his RS Spat Man O War, opened the Reining Team Competition and 1st individual qualifying round at the Alltech FEI World Equestrian Games 2014 in Normandy today.  The pair closed their run with a score of 216.5, score…

From the outset of the reining competition this morning, the United States and Belgium confirmed their status as the two countries to beat.

The French reining team is ready to go 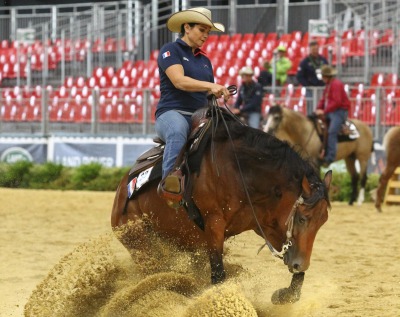