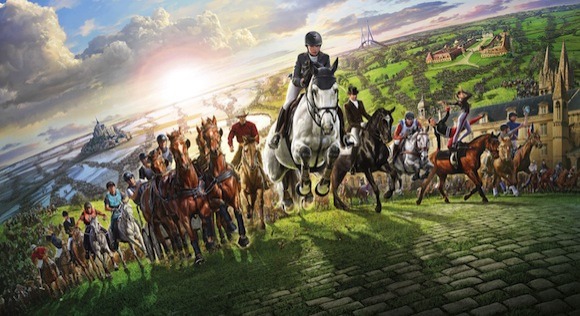 Celebrated every four years and alternating with the Olympic Games, the World Equestrian Games are undoubtedly the biggest equestrian event in the world. The finest athletes from 76 nations will compete against each other in the 8 official Fédération Equestre Internationale disciplines:

Three of those are Olympic disciplines (Jumping, Dressage, and Eventing) with Para-Dressage being represented at the Paralympics. Horse riding is the only Olympic and Paralympic sport to have both sexes competing in the same competition and where the athlete and horse both receive medals.

The upcoming edition will also be featuring two demonstration disciplines for the general public to discover : Horse-Ball and Polo.

THE EVENT IN FIGURES

The Alltech FEI World Equestrian Games 2014 in Normandy are not only a major sporting event for the equestrian community; they are, above all, a fantastic 15-day-get-together for …

In 2014, Normandy will host the world's biggest equestrian event: the Alltech FEI World Equestrian Games. More than just a sporting event that will have the finest athletes and horses compete against each other, the 2014 edition will give the expected 500,000 visitors a genuine insight into the equine world. It will indeed be the occasion for everyone to come together in a truly exceptional place.

In addition to this, the Normandy 2014 Organising Committee believes in horse riding that is unifying, open and accessible to everyone who is convinced that competition is an occasion for coming together and sharing. 4 values will be at the center of the 2014 Games :

ACHIEVEMENT AT THE HEART OF HORSEMANSHIP Normandie 2014 is born from a sports challenge, one that displays the EXCELLENCE and SKILL every four years and horse riding at its best international level, requiring Normandy to meet the highest standards in terms of quality at all stages of the organisation. An event that celebrates the perseverance of the riders, the commitment of their teams and the character of their horses to stir the public's FERVOUR. A quest for BEAUTY and adrenaline, a search for sensations and PERFORMANCE at every moment.

OPENNESS : HORSE RIDING FOR EVERYONE Normandie 2014 strives to be accessible to as many people as possible and to give them the chance to DISCOVER horse riding and an equestrian culture that is far removed from the clichés of elitism and impenetrable gatherings. A competition that is DIVERSE, international, interdisciplinary, and for all audiences.An occasion for everyone to enlarge their horizons, break away, and satisfy the desire for FREEDOM that is so intrinsic to the attraction of horses and of Normandy. A SHOW that will surprise and bring ENCHANTMENT to amateurs and experts alike.

RESPECT: A STATE OF MIND TO BE SHARED Normandie 2014 undertakes to preserve the AUTHENTICITY of the environment and of the region's cultural heritage; it encourages the people of Normandy to demonstrate their PRIDE. A moment of CONVIVIALITY between Normans, competing nations, and disciplines no matter how different they may be. An occasion for visitors to experience the friendly and SINCERE hospitality of the Normans, and to DISCOVER or rediscover a region with spirit.

TRANSMISSION: THE PLEDGE OF AN ONGOING HERITAGE Normandie 2014 is an opportunity to INITIATE all generations to the culture of horse riding and of Normandy. Created in the spirit of AUTHENCITY and CONTINUITY, the event also aims to be a platform for INNOVATION, a driving force for a dynamic and appealing Normandy. Its impact will be lasting, far beyond sporting excellence, it is the EXCELLENCE of Normandy that will remain long after.