Local authorities will be present to help keep traffic running smoothly for visitors, accredited staff and local residents for the duration of the Alltech FEI World Equestrian Games™ 2014 in Normandy.

Various measures have been taken to lighten traffic near the venue sights and provide drivers with alternative routes.

Visitors and other users should follow the suggestions and traffic routes established by the local authorities.

Traffic is expected to be difficult near the “Arc Equestre” zone: the Georges Pompidou and Yves Guillou Boulevards and around the La Prairie area.

We kindly ask visitors and other users to refer to the suggested alternative itineraries. We strongly recommend you avoid the Zénith roundabout for the duration of the Games.

Several streets and roads will be closed at certain times or throughout the two weeks of the Games:

Road closures from 23 August to 7 September 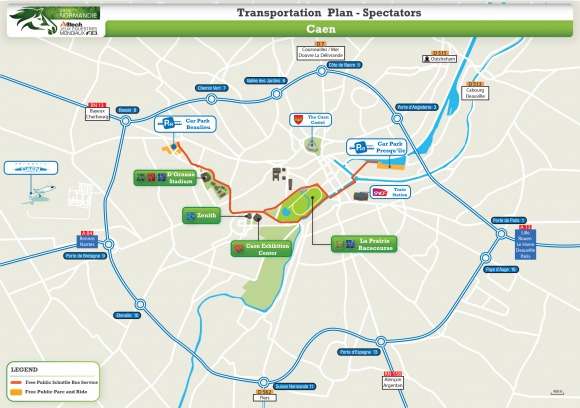 CAEN – Résidents and other users

The city of Caen will make a car park available with 1000 free spaces in Côte de Nacre: Entry and exit from Rue de la Girafe, with direct access to the town centre by tram with transport all the way to the CHU stop.

A special traffic plan has been created for the Cross-Country event on Saturday 30 August. It will be effective from 6am to 8pm.

From the A28 and A88 motorways, visitors should follow the obligatory exits indicated by the temporary road signs:

From the A88, Exit 15 – Mortrée is strictly reserved for accredited vehicles (officials, national federations, special invited guests and organisation staff).

The Regulated Traffic Zone is a perimeter set up around the Haras National du Pin Stud to restrict access. The zone will be effective on Saturday 30 August 2014.

Visitors: From Bourg St Léonard, Exmes, Nonant le Pin and Almenèches, access points will be set up by the National Police (more than 100 officers) to redirect traffic as necessary. The Organising Committee will support the National Police with staff, while the Conseil Général de l’Orne will provide logistical assistance (signs, barriers, etc.).

Certain roads will be one-way only. Visitors and local residents should exercise caution and watch for these temporary one-way indications.

Residents living in the Regulated Traffic Zone and professionals working in the area (doctors, veterinarians, farmers, etc.) should go to their local town hall with their vehicle registration papers (carte grise) from 11 August 2014 to pick up a pass. 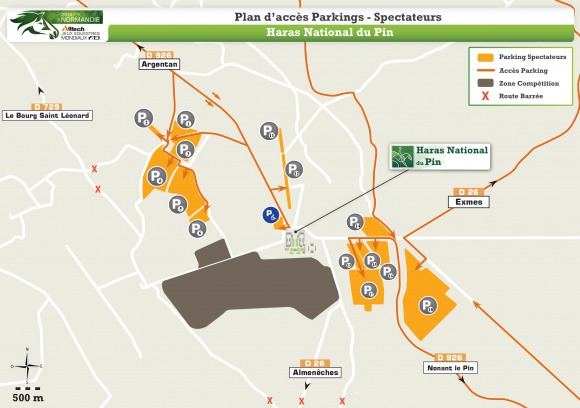 To avoid crossing Sartilly centre, the Conseil Général de la Manche has set up a detour from Avranches and Granville.

Drivers should follow the temporary detour signs set up by the Conseil Général de la Manche.

Drivers should exercise particular caution on Thursday 28 August 2014, the day of the  Endurance event held around Granville, Avranches, Sartilly and La Haye-Pesnel. The event will cross various roads in this area between 7am and 8pm.

Staff from the Organising Committee and National Police will be in place to signal the crossings. 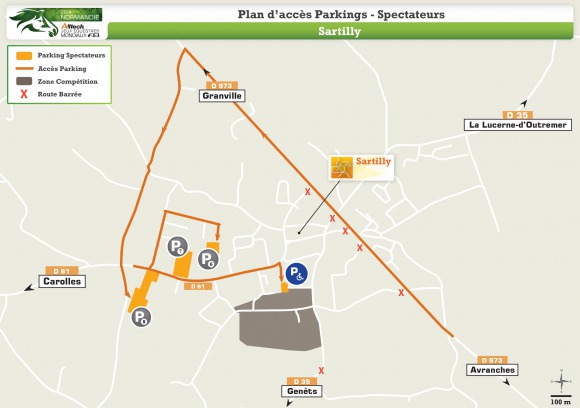 For information on traffic conditions and alternative routes, go to the websites of local authorities: